Two months on the road! Yes, it’s been two months already since we moved into our motorhome! On the one hand it feels sooo much longer, as so much happend in only two months – on the other hand its just incredible how time flies! In today’s post I am sharing a recap of our second month, living in a camper van!

Maybe you remember that our first month ended with the highlight Mont Saint Michel!? After that we were ready to leave Normandy and to drive over to the other side of Brittany. Since the weather was rather cold and windy, we decided not to drive along the entire brittanic coast, but to cross over directly to the Atlantic Ocean. So after one more day at the beach close to Month Saint Michel (in Hirel), we took off to our first stop: Dinan – a beautiful little town built entirely of stone. We arrived late in the afternoon and took a long walk into the town center in the evening sun and back at sunset. It was such a beautiful evening and we enjoyed the sunshine very much – as if we already knew that it was the last time for three weeks, that we were able to feel the sunshine on our faces! Because from now on it was raining for three weeks pretty much non stop! 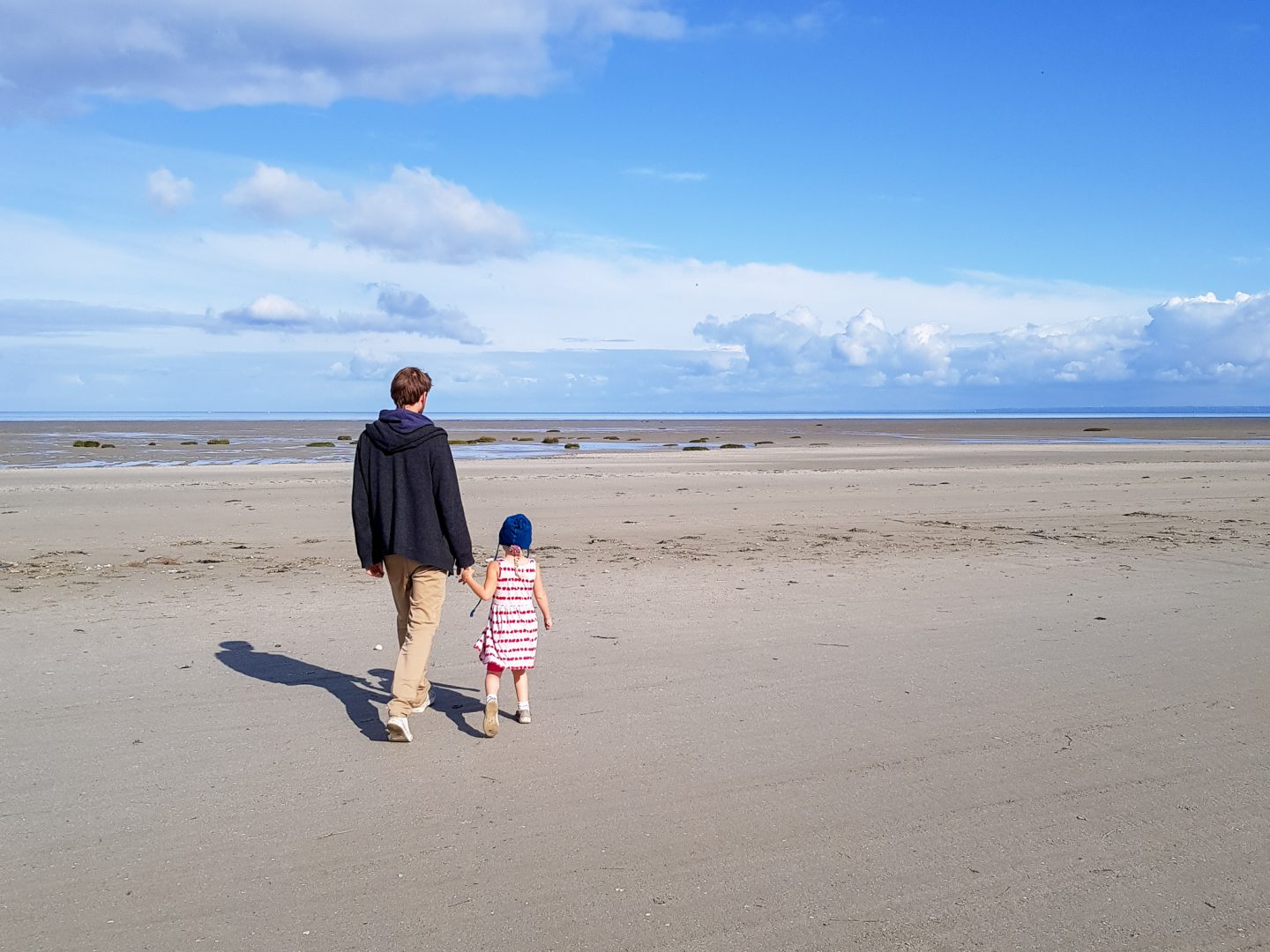 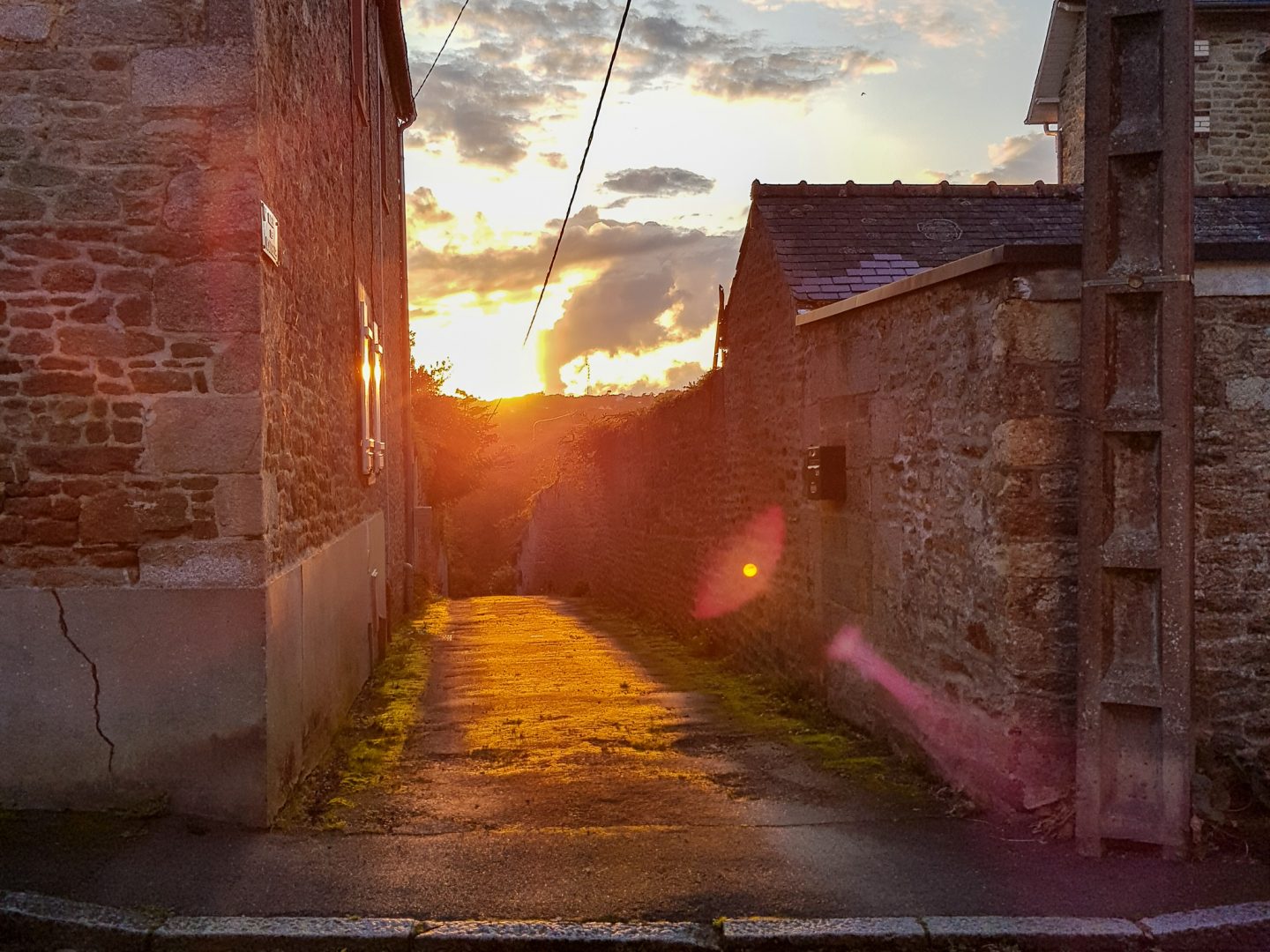 The next three weeks were quite of a challenge!

The first few days were still okay, we drove over to the Atlantic Ocean with only one more stop and also on arrival at the coast it was still quite okay; there was rain, but also sun or at least a “friendly” grey sky, and we had a really good time in the Baie de Morbihan and on the Quiberon peninsula. On the peninsula we went for a magic five-hour hike along the cliffs. You can find more pictures from Brittany and our hike in my Brittany Highlights!

But even though we had some sunshine in between, we also had rain almost every day. With the rain it got increasingly cold and on the coast it was very windy. We spent more and more time in the motorhome and went out only for our obligatory afternoon walks or to explore a new area. Just playing outside or living with the door open was no longer possible. 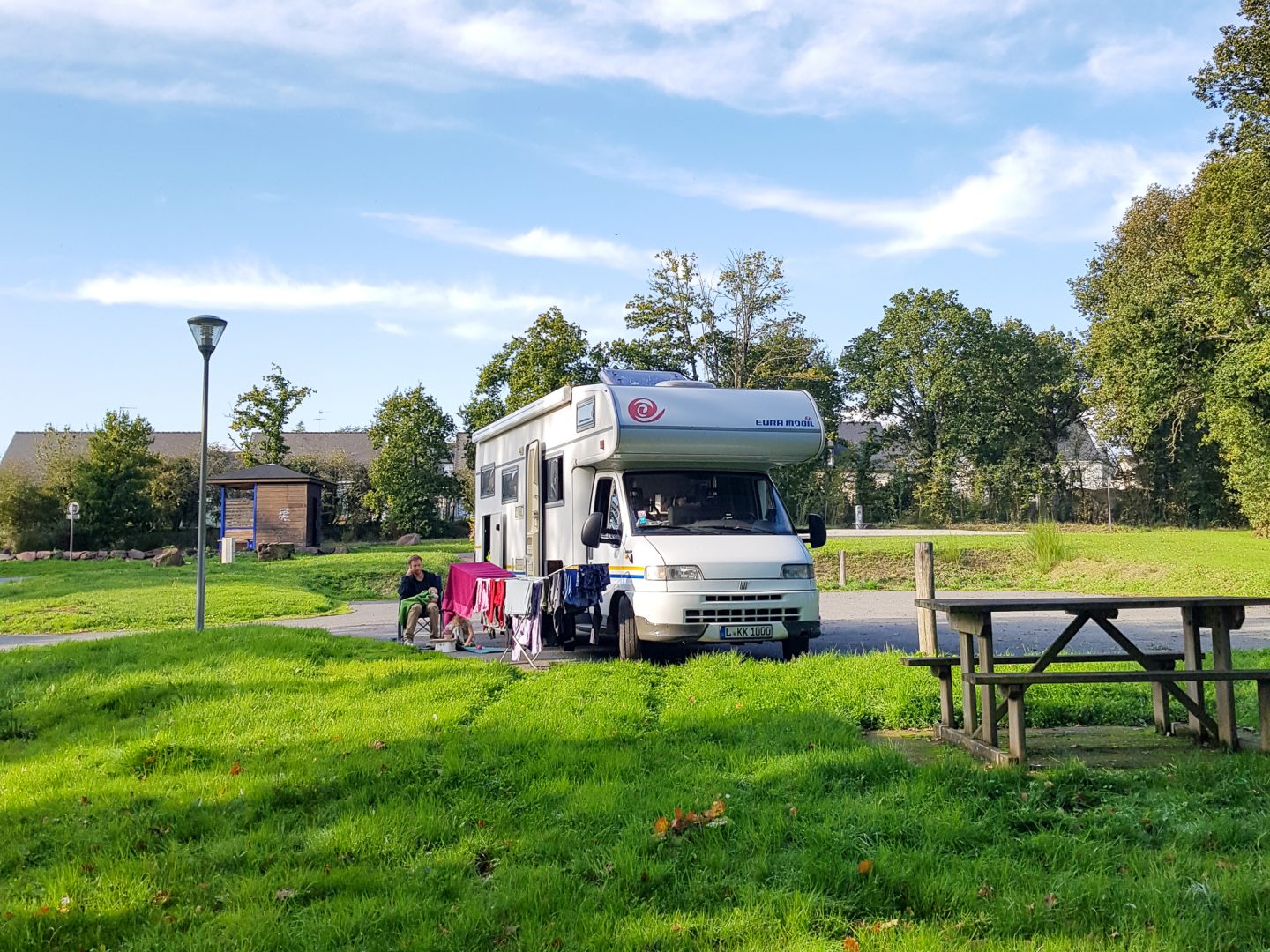 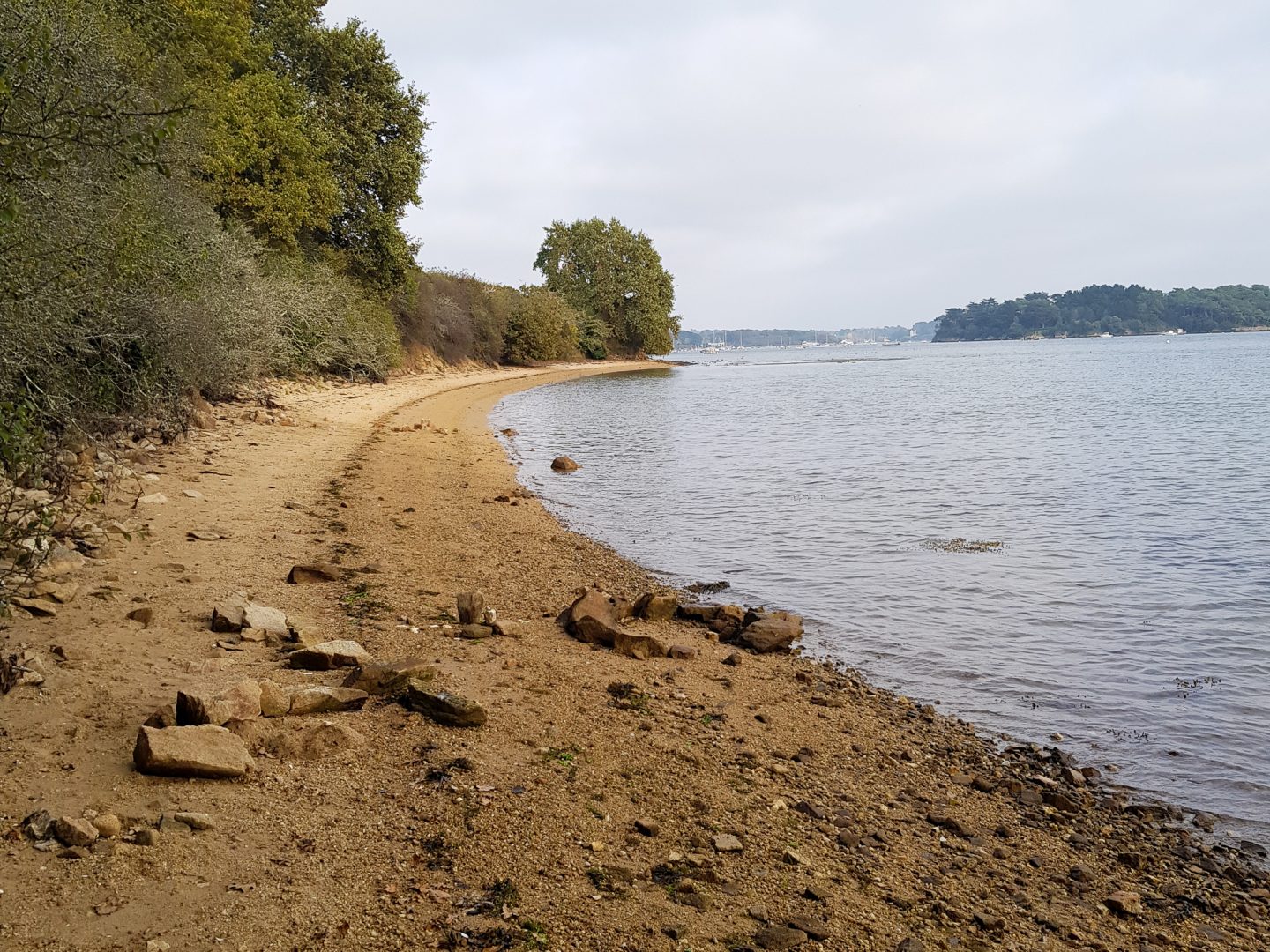 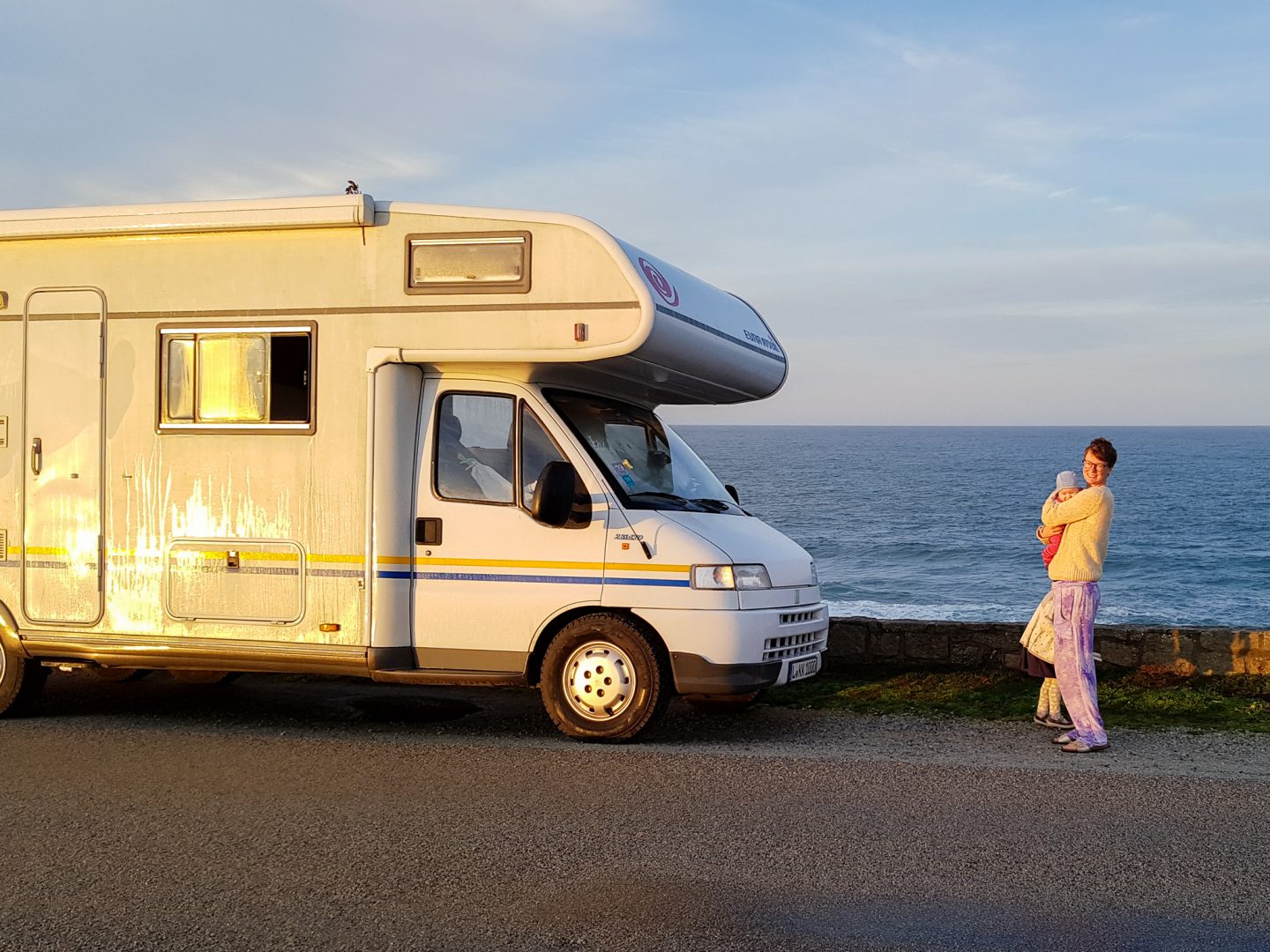 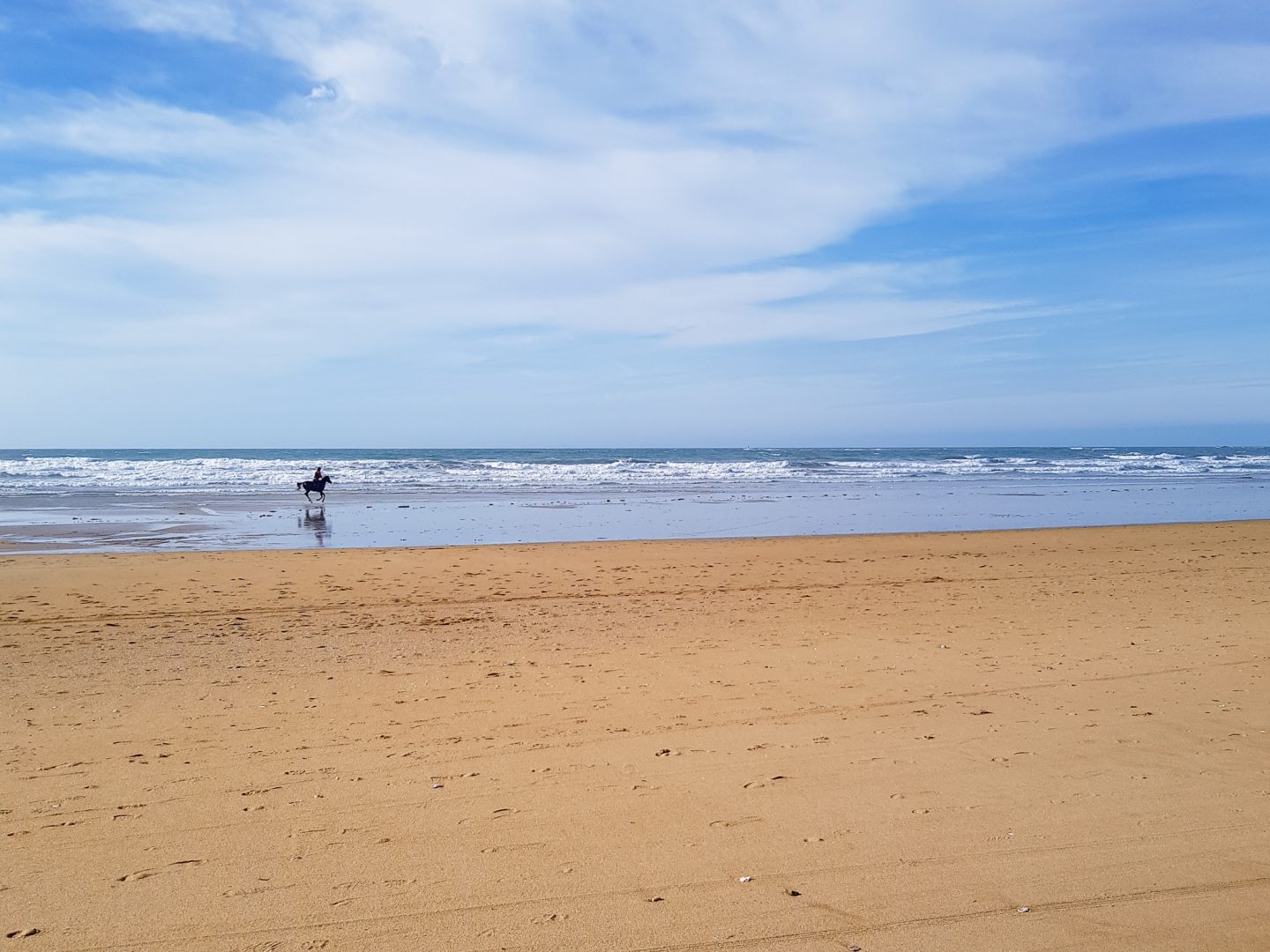 We tried our best to take it easy, left Brittany and drove through the Loire region (flat country with millions of small streams and lakes) towards the Dordogne. We had days where we didn’t leave the motorhome – or if we did then it was to do the groceries or laundry. It was raining and raining and raining. We had tons of hot cocoa, painted millions on paintings with our girl – but as much as we tried to make ourselves comfortable, it was becoming increasingly difficult.

We got a little break when we went to the Dordogne region, where we’ve been visiting an old friend of mine and spent a few days with him. It still rained but since we’ve been able to switch back and forth between his house (with loads of toys which made our girl very happy) and our motorhome, it didn’t feel quite as oppressive. We stayed some four days in Mussidan and although it was wonderful to be spent some time with friends, we wanted to continue our journey: towards the sunshine! 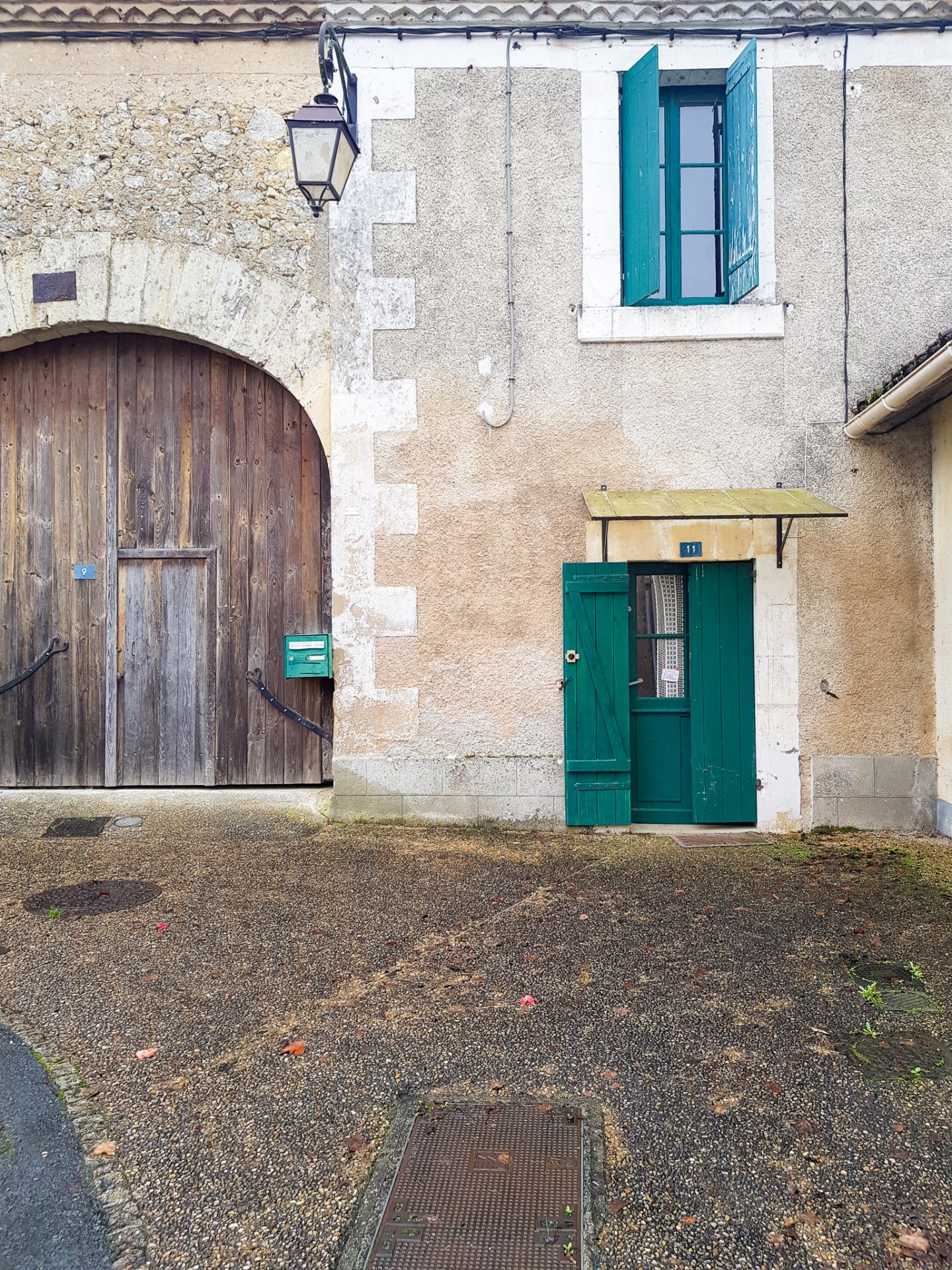 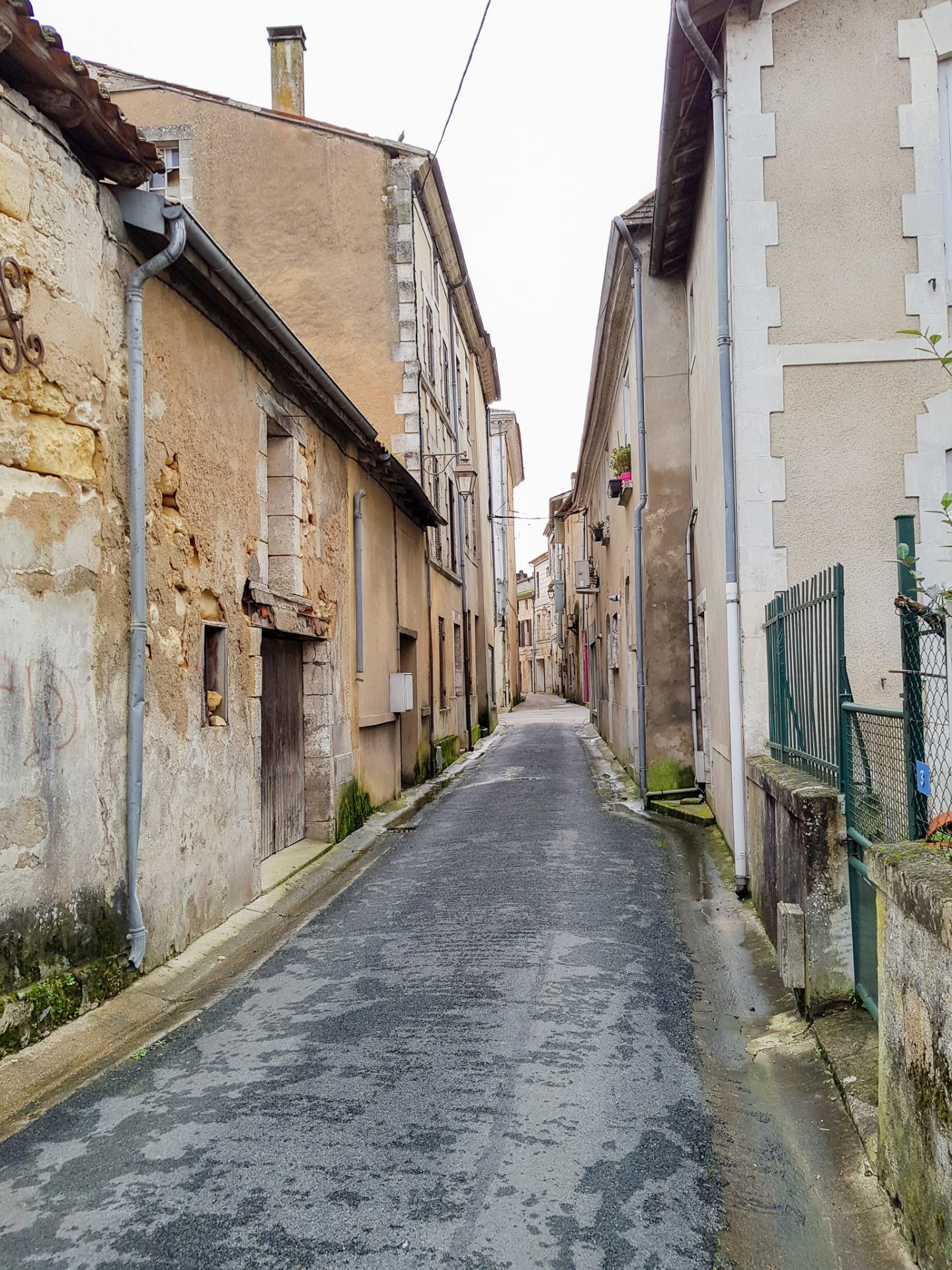 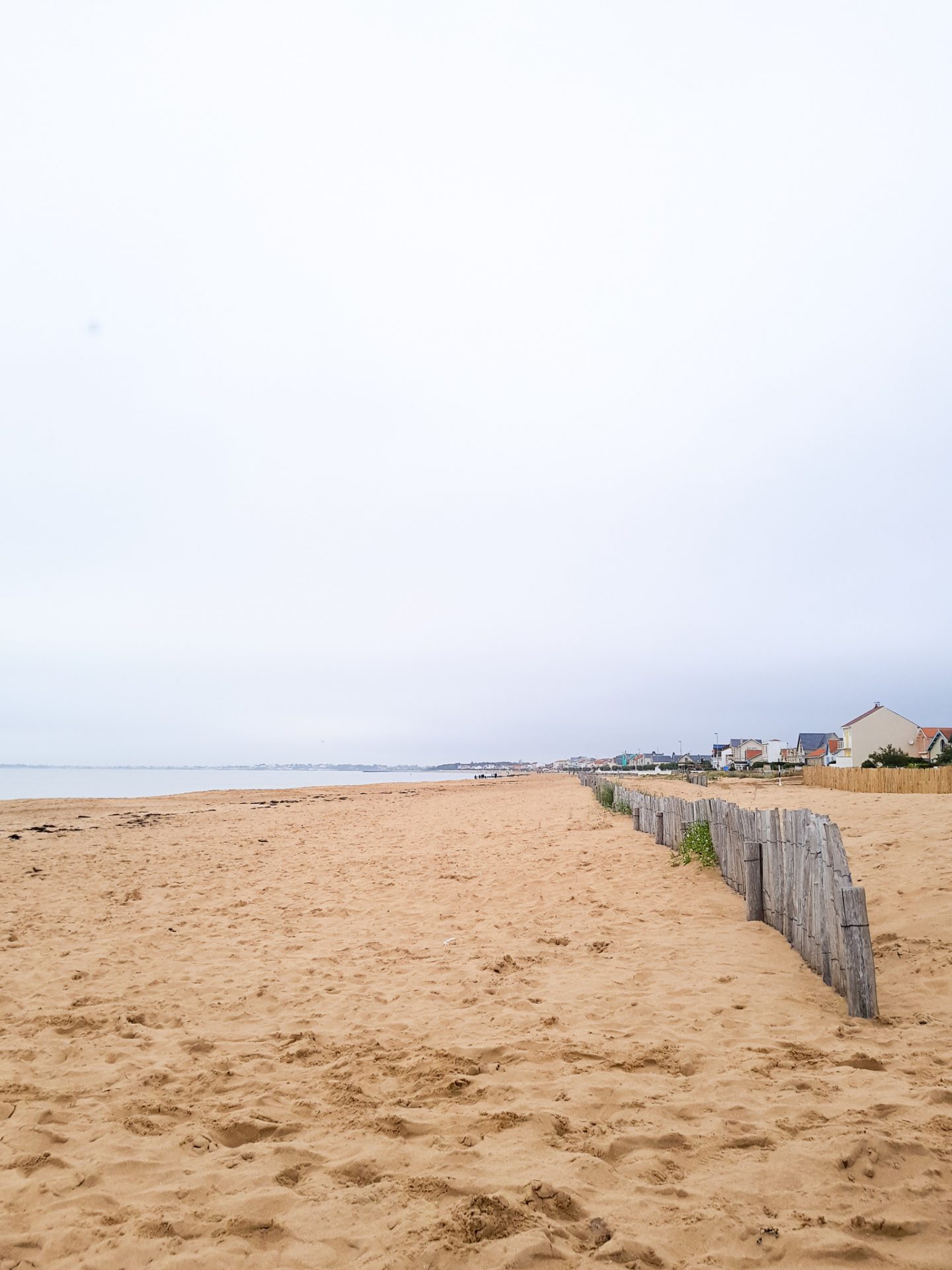 The issue with the rain was’nt only that it was limiting us, but also that we got  some difficulties with the moisture in our motorhome: at night the windows fogged up and the moisture got collected in the corners, especially in the cupboards; and here we store our clothes, which also absorb the moisture. We had to wipe out regularly, heat and ventilate a lot to keep everything under control. It was especially difficult in the alcove because the heater, which is installed on the other side of the motorhome, has hardly any power here and only a little bit of warm air arrives. In addition, the alcove is particularly cold, because it is directly above the poorly insulated cab.

The moisture was all over the place and since the sun wasn’t shining and it was still raining outside, we couldn’t get it out! 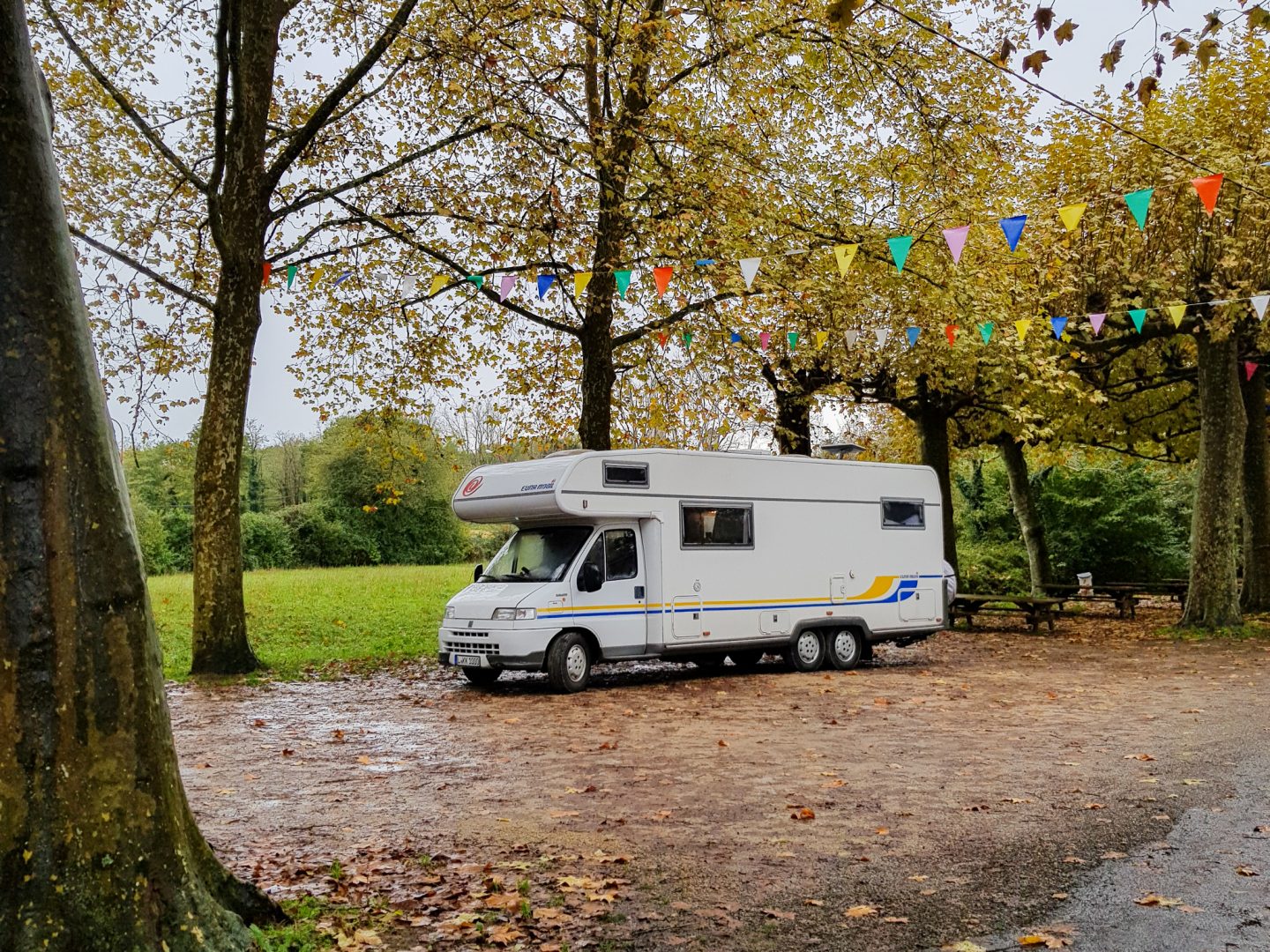 While driving, we saw flooded fields, drove over rivers with overflowed banks and houses that were completely cut off from the road by large lakes – it was not only us suffering from the weather!

Despite the rain, we had loads of beautiful moments and we saw dreamlike landscapes: we slept at the top of a vineyard, overlooking endless wine fields, on nice farms and pitches in small, beautiful villages. We went for beautiful walks and visited Bergerac, as well as various cute little villages.

And we definitely did not want to be anywhere else than in the RV at any point in time! 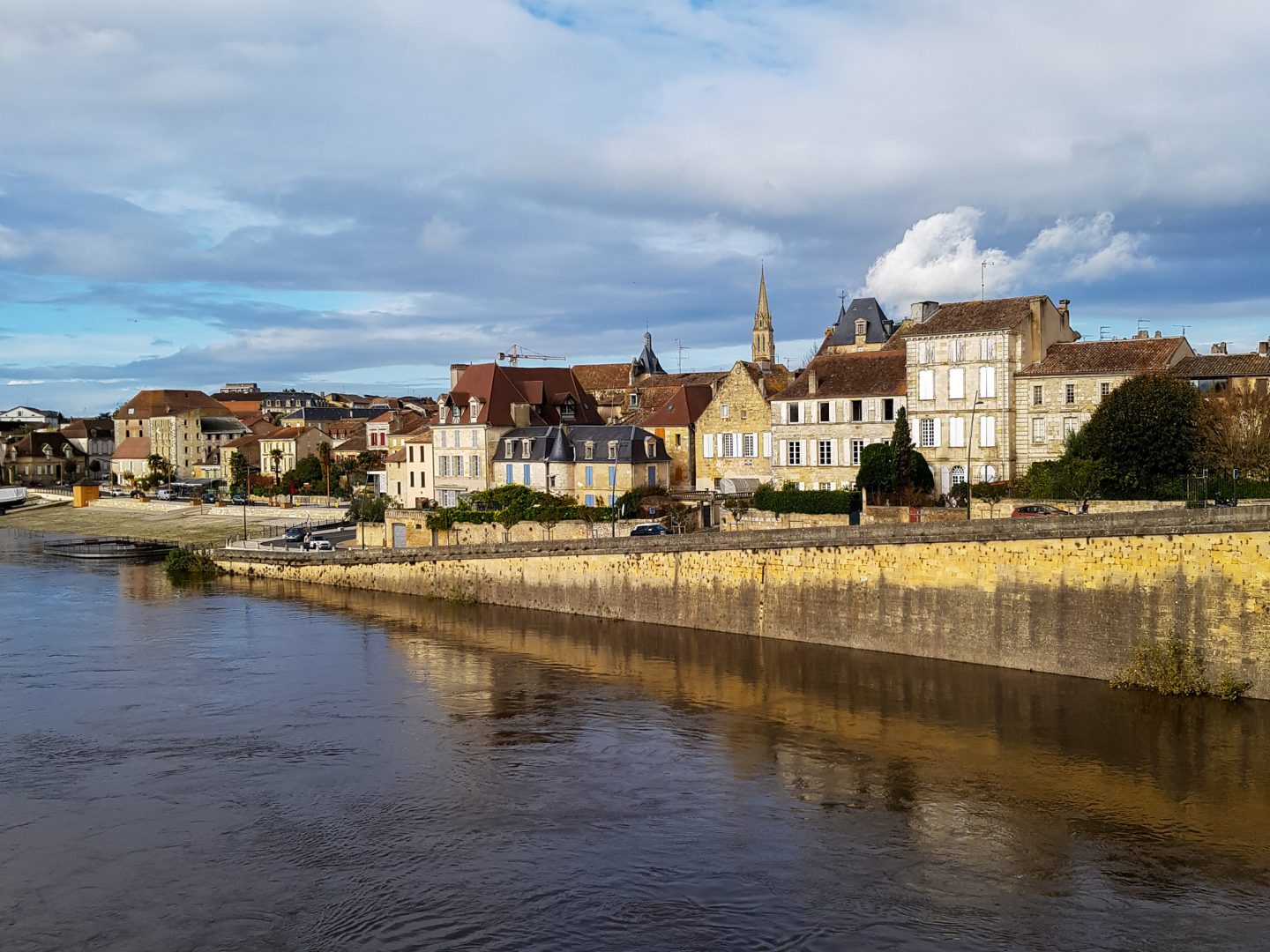 After our visit to the Dordogne we went back to the ocean: we hoped that the weather would be better behind the Pyrenees, in Spain. First we spent two days in Biarritz and then drove to San Sebastian.

We’ve been looking forward to Spain at lot, because we had hoped to find the sunshine here. Unfortunately, we got disappointed: Spain welcomed us with crowded streets, traffic jams and horns – and an overcrowded parking space. But as it was the only parking in the area, it was not really surprising that it was so crowded. Anyway, we were spoiled by France: in France, we were always either on quiet farms or on small pitches in the most idyllic places, mostly alone or with just one other camper.

But it wasn’t only the crowded parking and the traffic: it also turned out to be harder than expected to get Spanish gas. And since our French gas bottle was empty, we were using our German emergency gas. We drove from gas station to gas station on arrival in Spain,  searching someone who would sell us a bottle of gas! Usually, you only get gas when you live in Spain but our research said that many filling station attendants were actually selling gas anyway. However, we now learned that this does not apply to the Basque Country. At a small campsite where we also asked for gas, an obviously stoned but very nice young man told us that the Basques are too conservative to do anything that goes against the rules and that we should better go to the south of Spain. Phew.

And it was STILL raining on top of all that. 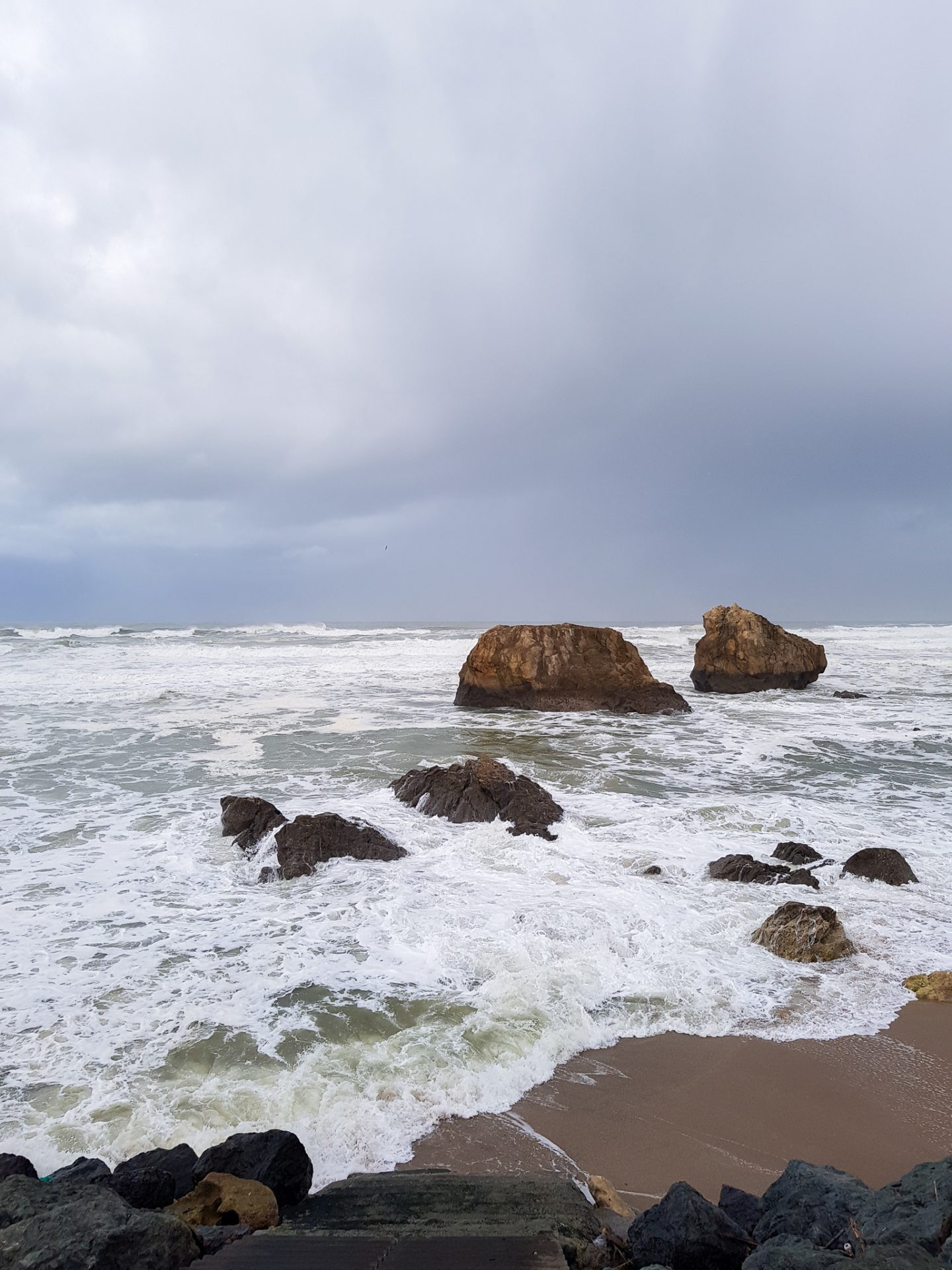 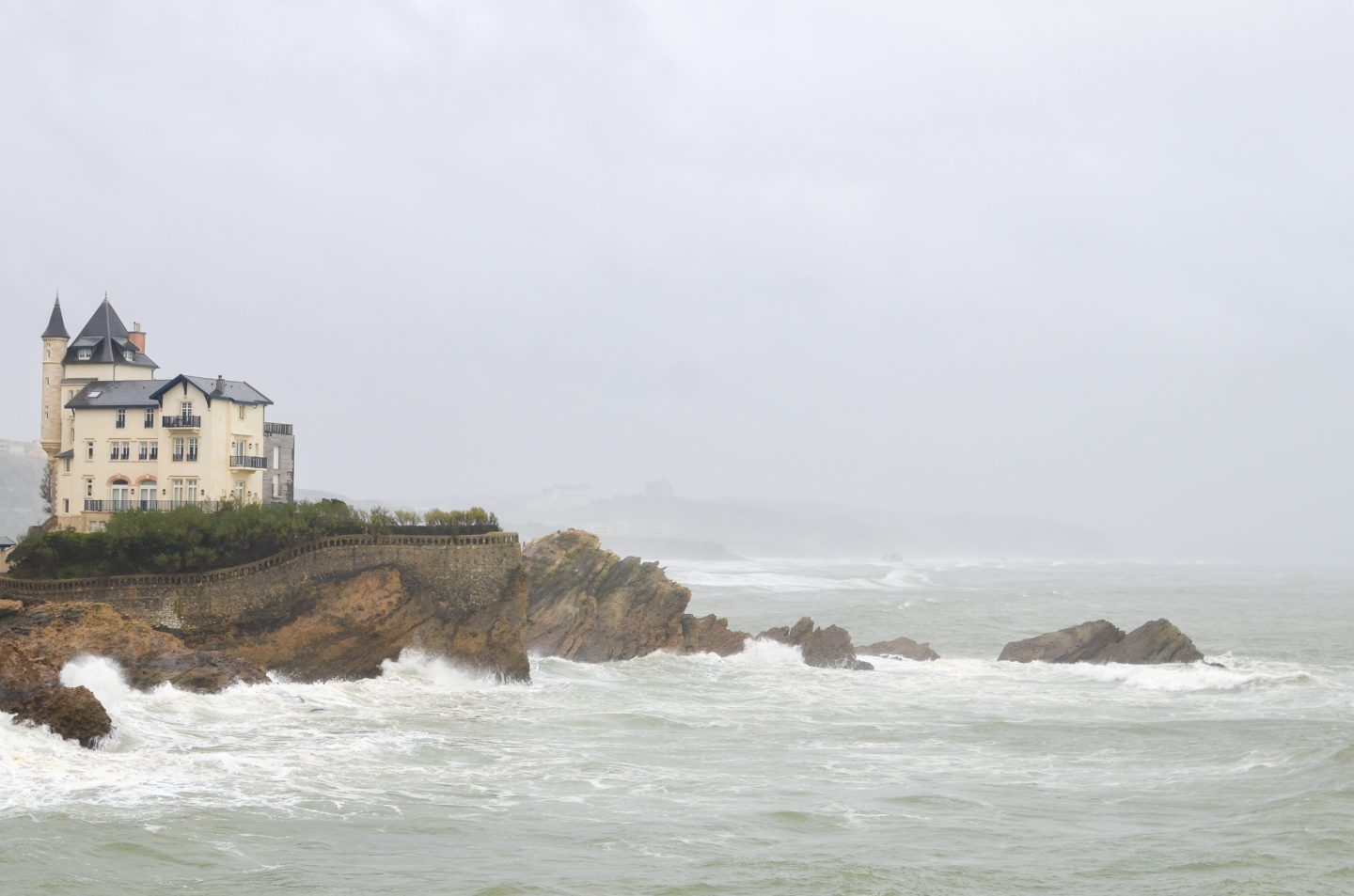 It was when we were laying in bed on that bright and relatively loud parking space and – once again – listened to the rain drumming on the roof of the motorhome that we decided to leave the Atlantic ocean. The weather forecast was showing even more rain for the rest of the month: not only here, but for the entire Atlantic coast, whether Portugal or Spain or France.

We were SO done with the rain. We were in need of sun-  just a few days to recover! So we decided to drive back to the France: to the French Mediterranean and then down the Mediterranean coast to Portugal. Our initial plans have been different, but it just felt SO right to do so now. So the next day we left early and went back to France. We were somehow so happy to go back, to buy us a new French gas bottle without problems and drive along the Pyrenees once across the country towards the Mediterranean Sea.

We had our first stop in a small village at the edge of the Pyrenees, on a pitch with the view of the mountains.

On the morning of the 13th of November, our two-month birthday on the road, we woked up with the sun: there was fog over the mountains, the sun was slowly rising, and we had a feeling that from now on everything was going to go better. 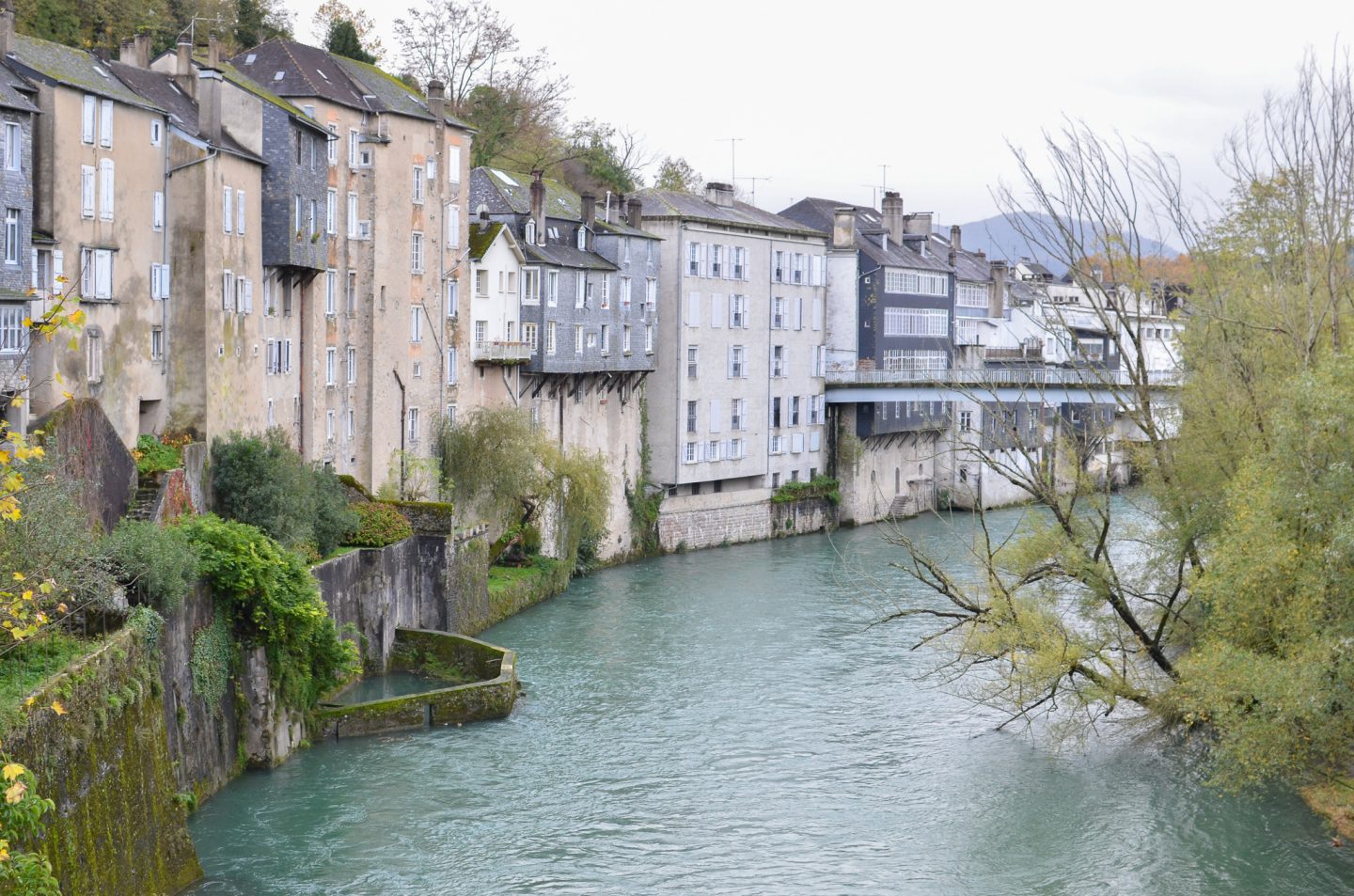 And yes, now we are here, close to the Mediterrean sea and we just had a beautiful day filled with sunshine… and already a few other quite crazy adventures. But those are going to be part of my next recap. All I wanna say now is: Winterwonderland. But that’s all for the next one.

Also, we are currently working on a new project for my German readers: there will be a new blog online in the next few days! On vanlifediaries.eu we will share our – surprise- vanlife diaries! It’s a much more personal blog and with much more text. But in case you want to know more about our journey, this is your address! 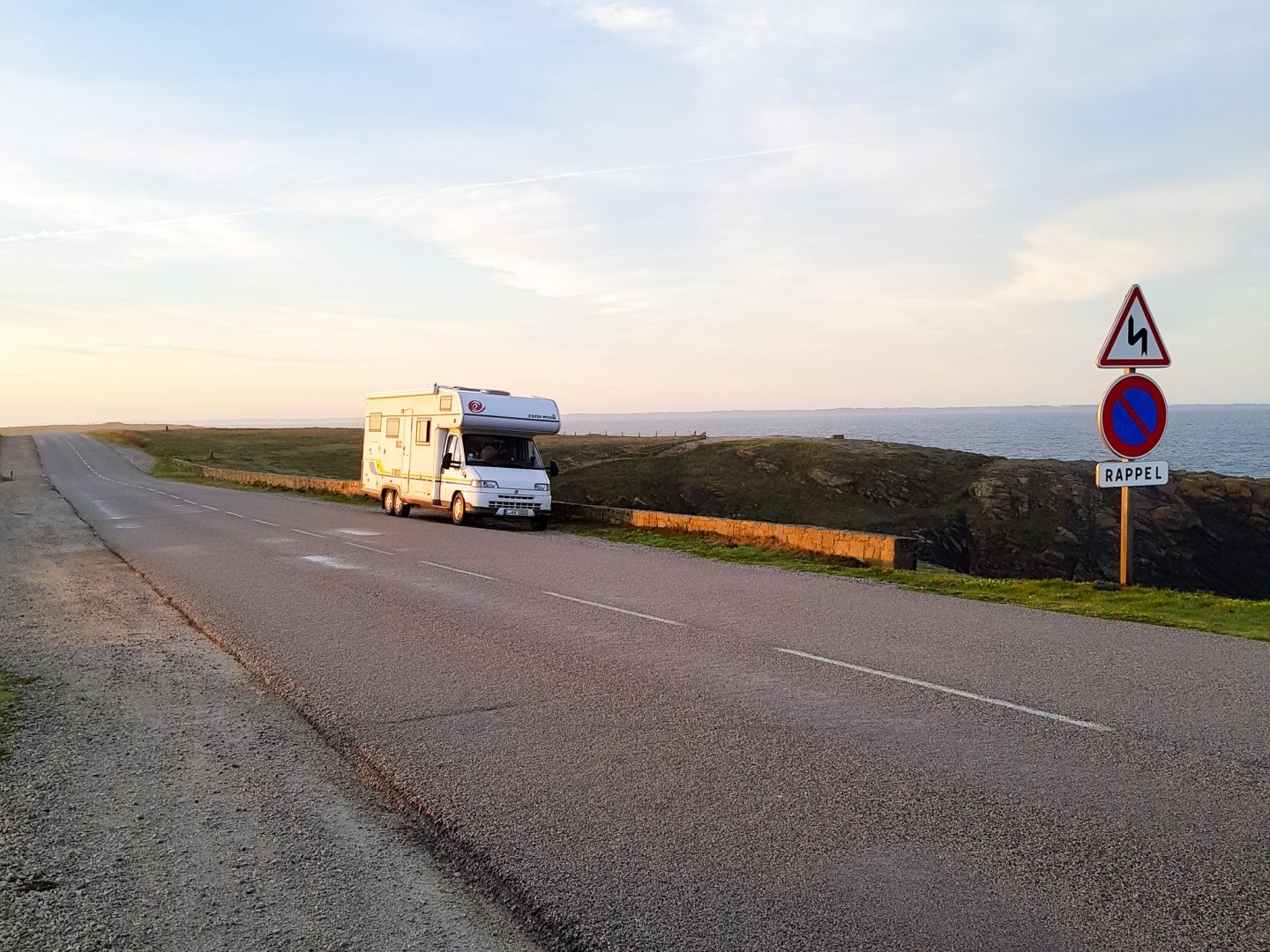