It’s postpartum week this week! So here we go with some delicious postpartum bliss balls which taste like peanut butter caramel. And a postpartum belly oil will be online in a couple of days!

These bliss balls are actually for everyone, no matter if pregnant, postportum, or not even thinking about having a baby. There is one secret ingredient in here that makes these balls especially great for women who just gave birth and who want to breastfeed their baby. However, you can easily leave that secret ingredient out and do without!

Also, I want to be honest with you and let you know that pretty much EVERY bliss ball out there is great for you after giving birth. At least as long as it based on dates or other dried fruit. The one thing you need a ton off after birth is healthy sugars aka carbs!

You do not believe me? Just try it: if you are a breastfeeding mother have a day where you eat loads and loads of healthy carbs, so eat loads of dried fruit, oats, potatoes etc. (no white flour, no refined sugars or highly processed foods). Just look at how much milk you have. Then wait a few days and make a low-carb day: and see how much milk you have that day! Yes, I promise you will be able to tell the difference! YOU NEED CARBS TO GIVE MILK! It’s actually that easy: eat more carbs – give more milk. Eat less – have less.

So no matter if you make these bliss balls (which is worth it, because they are so good!) or you just eat a ton of dates every day: both is great for your baby and you! 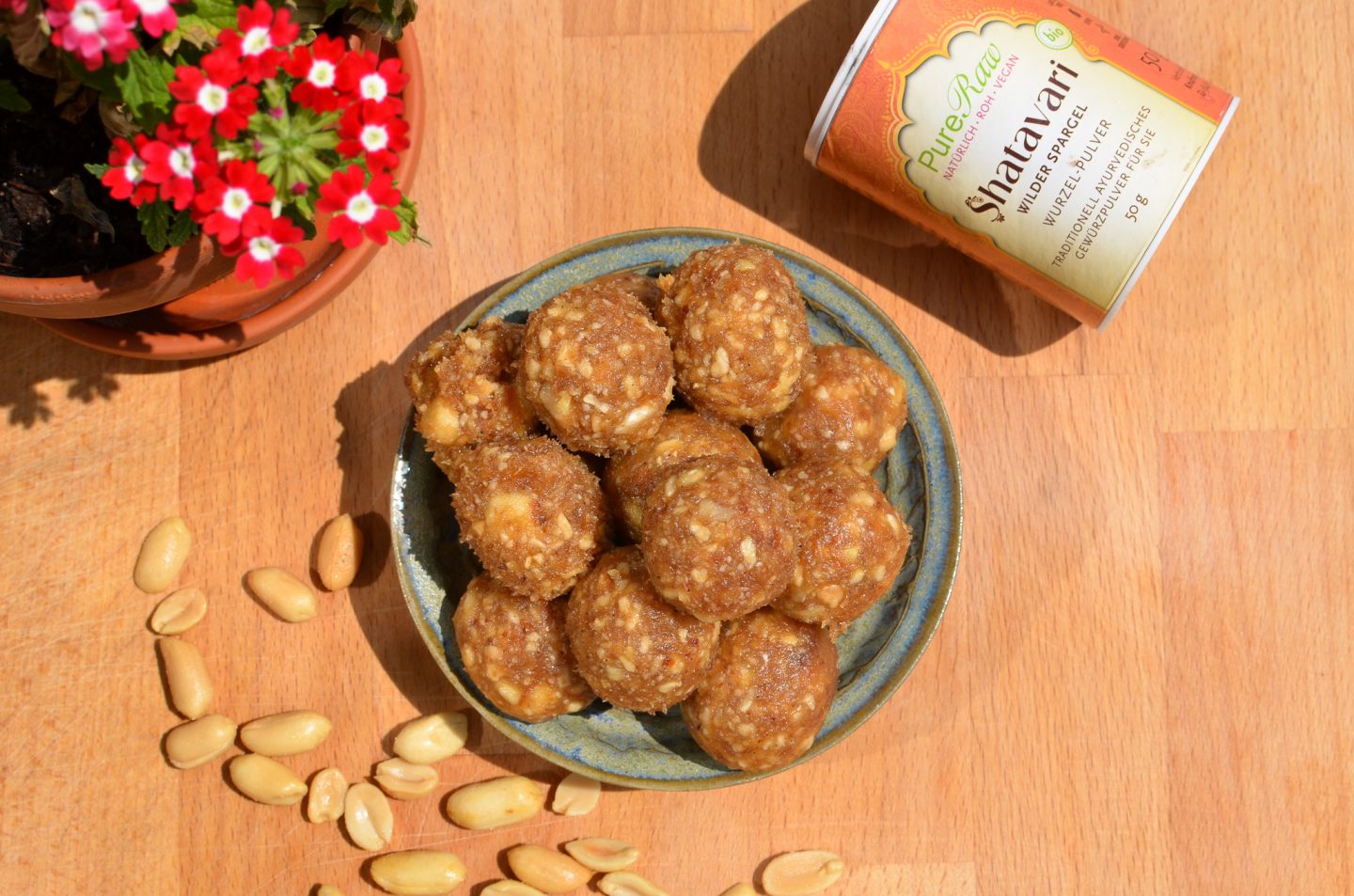 Anyway, these bliss balls are just so chewy, creamy, yummy, and delicious that I think you should give them a try. And the secret ingredient will help you produce even more milk for your baby 🙂

Can you tell which one is the secret ingredient ;)? 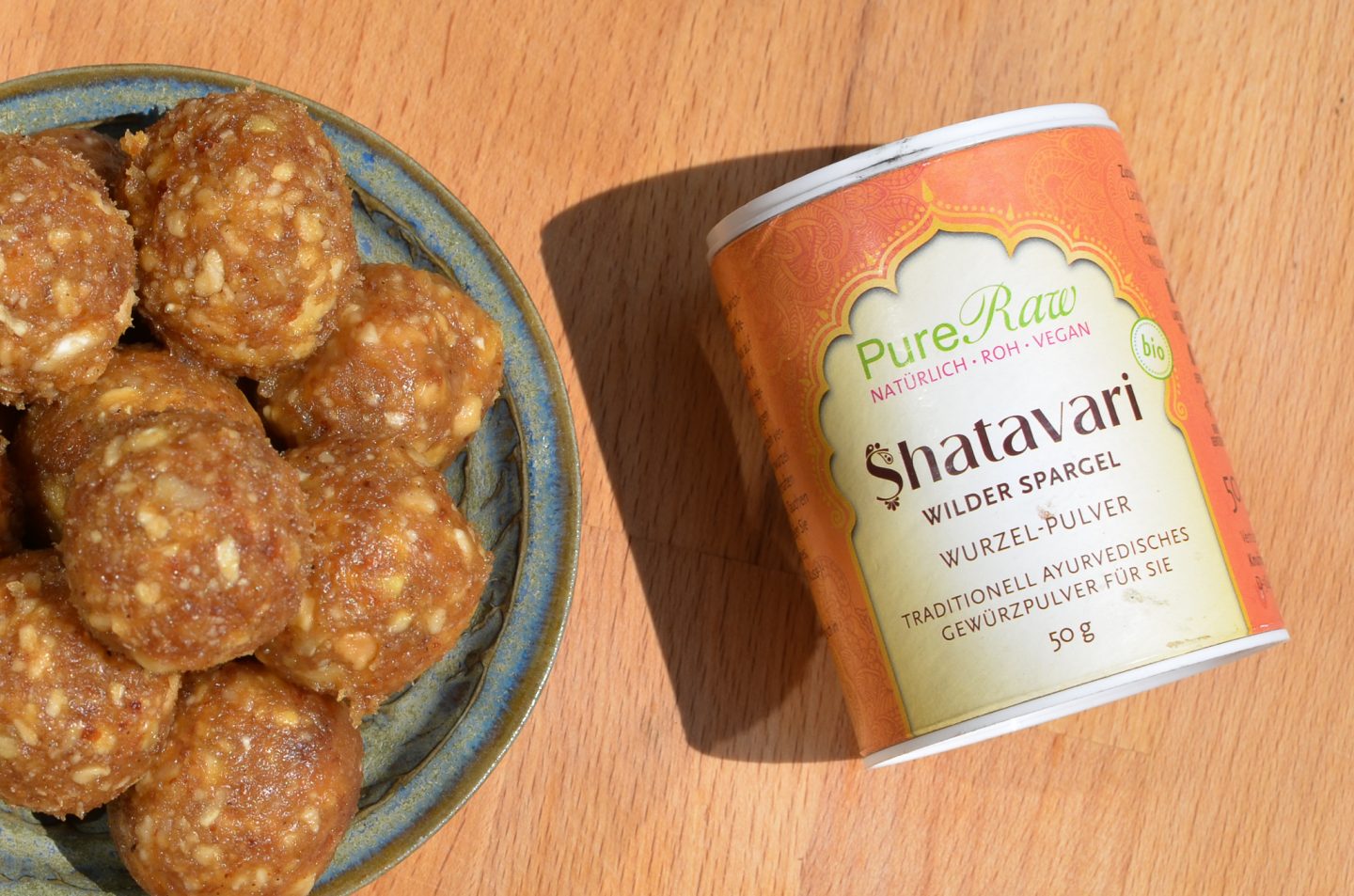 Shatavari can also help during pregnancy and even when trying to get pregnant. It is a “women’s herb” and is said to help with everything around women’s health: from menstruation to pregnancy to nursing.

I’ve been taking shatavari during pregnancy to stay in my “women’s power” or whatever you would like to call it – basically, because I thought it may help me feeling strong and powerful as a pregnant woman. I certainly did so, but obviously I do not know if that’s because of shatavari or not. 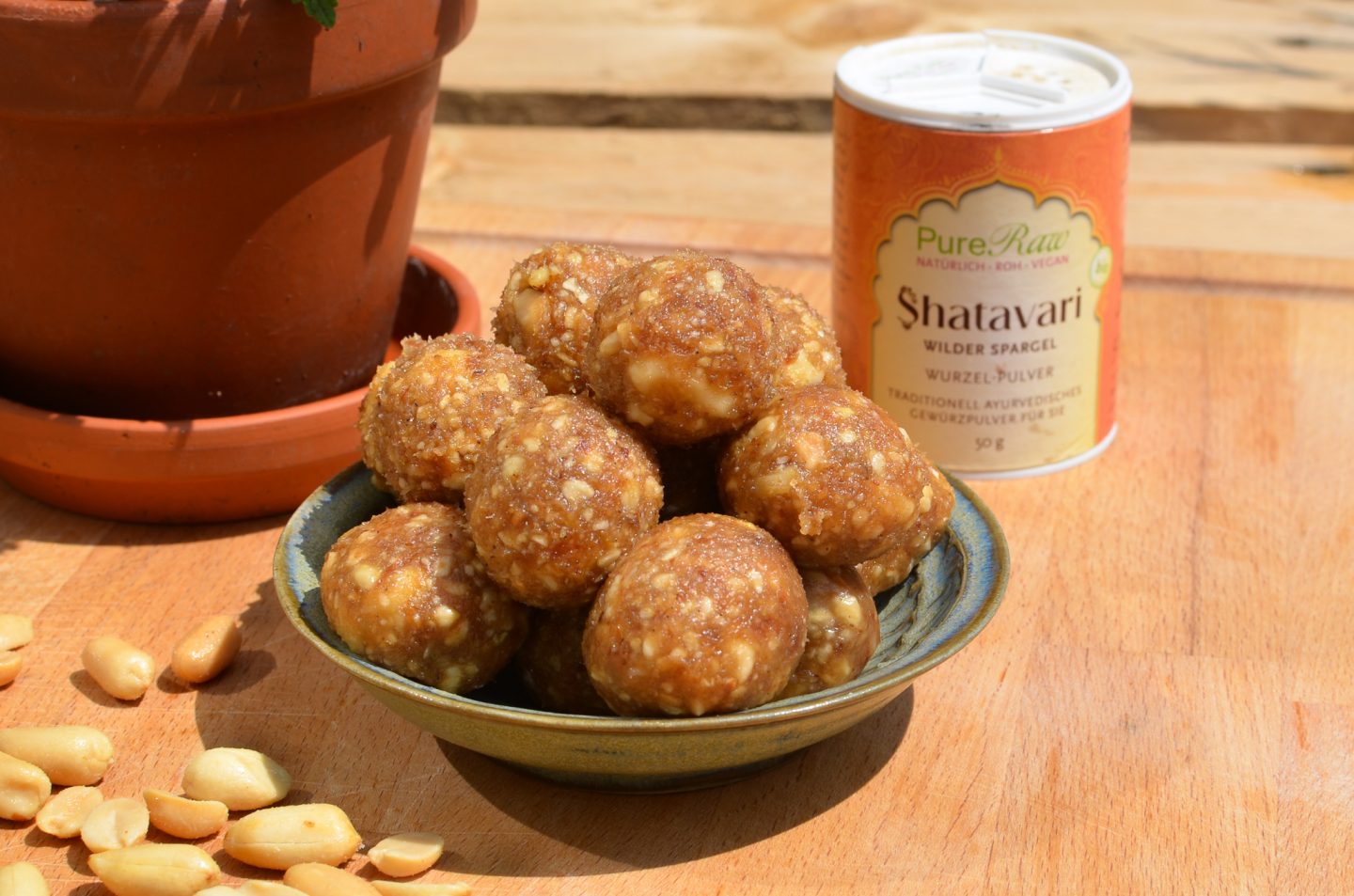 Now, to make your bliss balls, simply add all ingredients into your food processor and start blending. Then roll bliss balls with wet hands (easier!).

Depending on the texture of your peanut butter, the recipe may turn out more or less mushy. Feel free to add more dates or peanuts if you think it’s too mushy.

I personally like it when my bliss balls are far from dry but rather creamy; you can probably tell from the pictures here!? 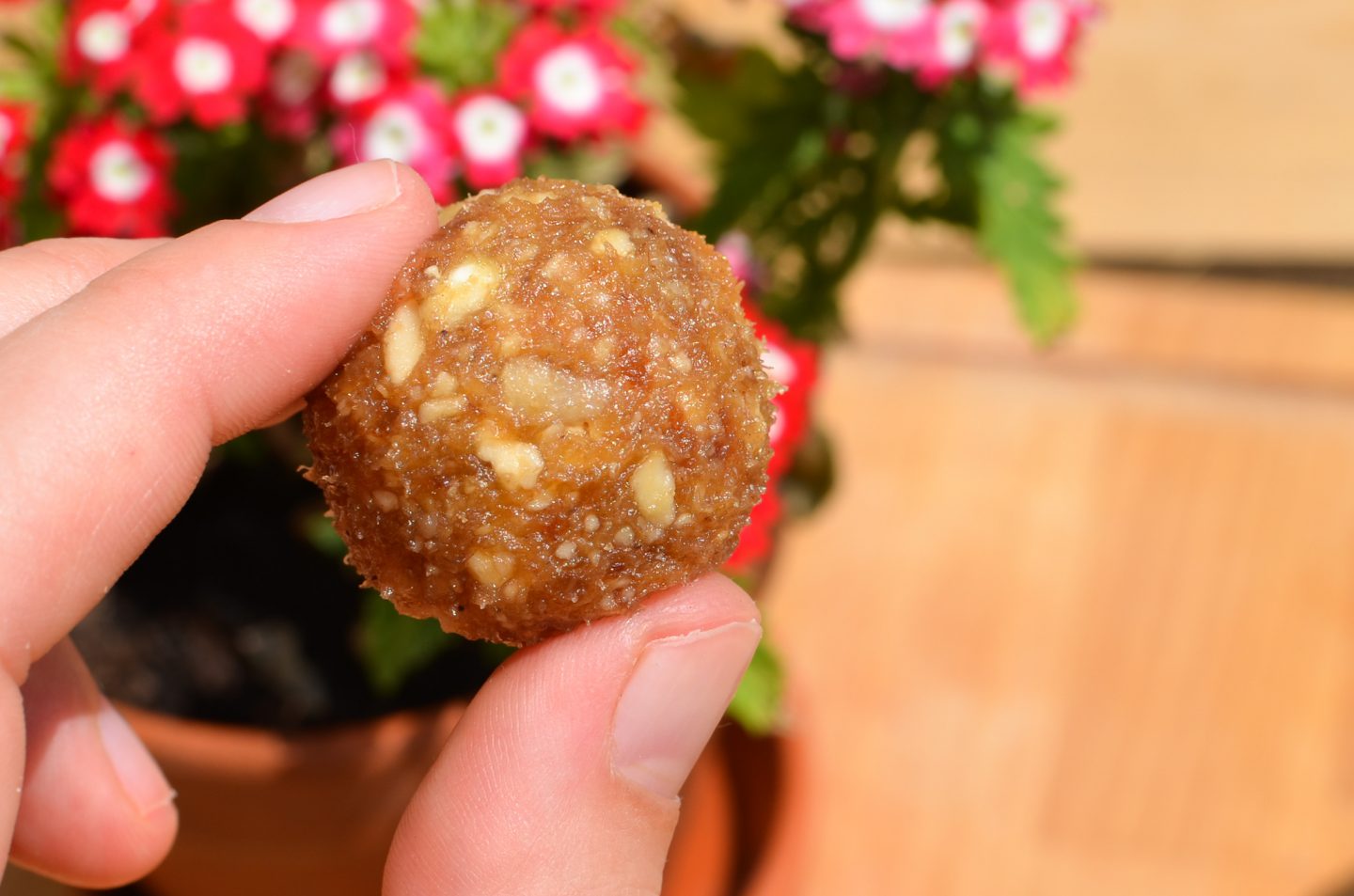 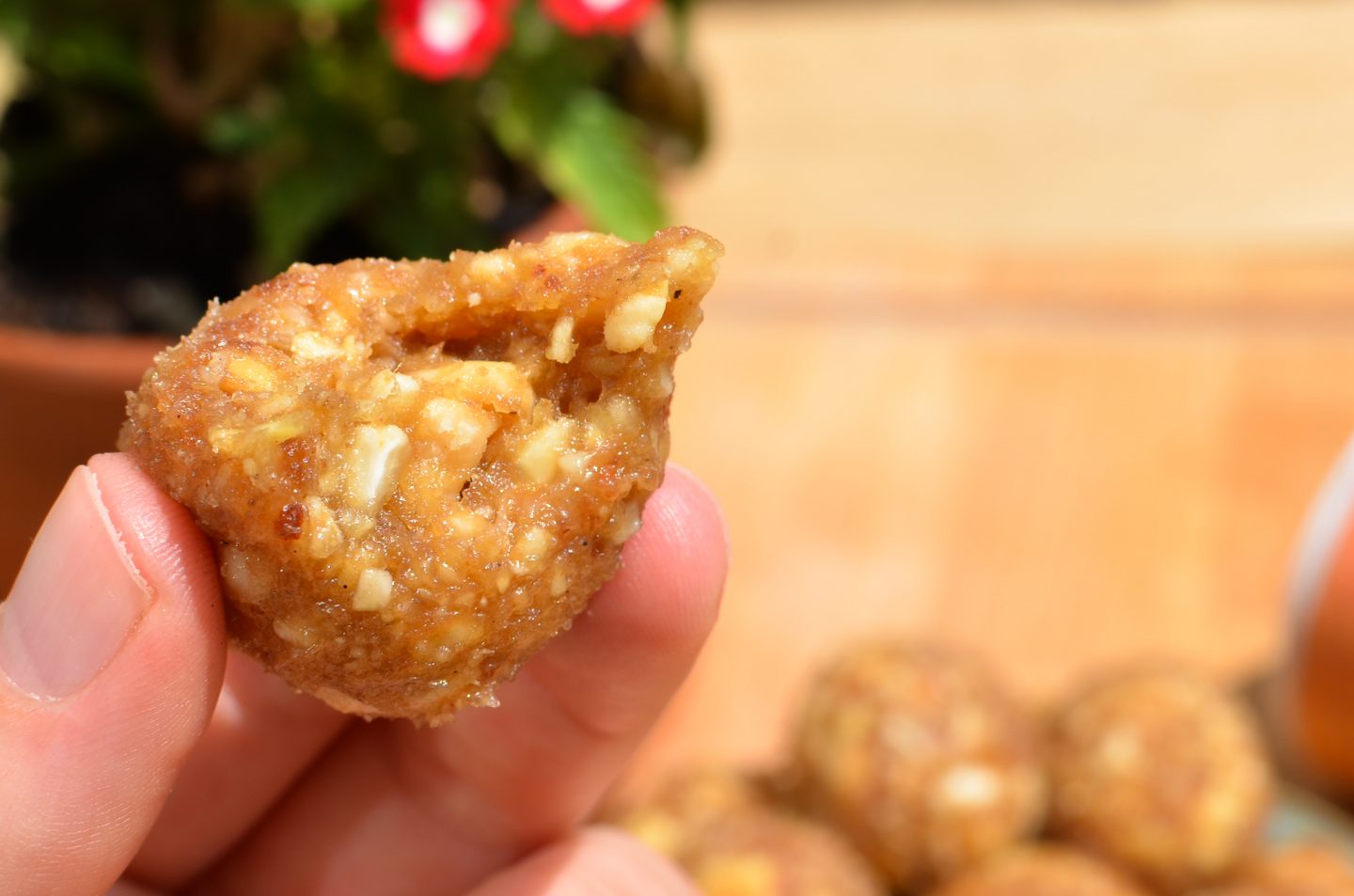 And yes, these postpartum bliss balls do taste like the most amazing peanut butter caramel! They absolutely do.

And yet they are heeeeaaaalllthy!

So go with these sweet little treats and spoil yourself and your baby!